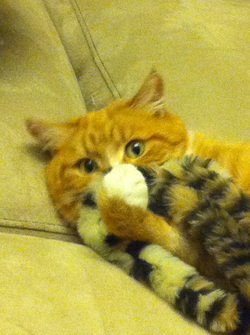 He loves chasing a laser pointer, eating crackers (someone please explain this to me), eating toys without playing with them, and most of all, sleeping on top of his humans .
He hates antibiotics, vacuum cleaners, when I slice bread (this too), being alone with no one to cuddle and large boxes.
He also half sneezes every single time you rub his chin.
Chester is a young male cat adopted from the BC SPCA in January 2012 by my boyfriend and I. We were looking for a cute, cuddly, healthy cat to love and nurture for years to come. We decided to go with an adult cat from a shelter because we really support adopting animals, and recognize that adult cats (as well as kittens) need homes too. We met Chester (Then, Cheetoh) and fell in love instantly. He was a very docile cat who climbed into our lap and purred as soon as we opened the cage and pet him.
Since bringing him home, Chester has been the best pet either of us have ever had. He always uses his litter box and scratching post and never scratches the furniture. He actually waits at the door for you to come home. He has been the most loving, well behaved cat that's ever been.

The only part of our plan that didn't play out was the health issue. We took Chester to a nearby vet the day after we got him, citing his sharp hip that we had noticed. The vet said he seemed healthy, since the SPCA said he was so, and the hip was just malnourishment (Chester weighted 8lbs back then and was very, VERY skinny). We did some blood tests to rule out Feline Leukaemia and FIV, both came back negative. Chester then came down with an upper respiratory infection the next day. This isn't uncommon from shelter animals, and it went away within a couple weeks with a few vet visits, so we thought we were in the clear.
Next Chester had tapeworms. The SPCA had promised that he was dewormed in their care, but he'd never been outside since adopting him, so apparently he wasn't immunized there. Also relatively easy to fix though, so not too big of a deal.
After a few more times at the same vet for various other immunizations and issues, we decided to switch vets to someone who listened to our concerns. Chester had been having a hard time urinating, was lethargic since before we adopted him, and we were really worried about his quick, laboured breathing which he'd always had but was never looked at. After a few minutes with the new vet, she had him correctly diagnosed. She took X-Rays to be sure, and started all of us on a terrible journey.
Chester had been hit by a car sometime before we adopted him. His sharp hip was actually a fractured pelvis. The trauma had also ripped his diaphragm and sent every one of his organs except for the bladder and rectum into his chest cavity. Normally, only the lungs and heart are in the chest, so the stomach, kidneys, intestines, and other organs present in there were pressing on his lungs and suffocating him. Hence the short, laboured breaths. He had trouble urinating because he couldn't work up enough pressure on his bladder without other organs. All of the signs were there, and a skilled veterinarian was able to put the pieces together in a matter of minutes. How could anyone with training have missed it? A whole lot of non-communication and assumptions are all we can come up with.
*Update to anyone who was wondering. The SPCA has a clause in their adoption contract that the adopters take on all responsibility for an animal's health unless the SPCA missed something big. As this is something pretty big, we did try to contact the SPCA when we first found out about Chester's condition in May. Being a non-profit, we were told that they didn't have money to help pay for Chester's care; they could only refund our adoption and take him back. They can only afford to put $500 dollars into rehabilitating an animal and Chester costs way more than that, so he would have been put down. While we are disappointed and upset by what has happened, we genuinely believe in and support the mission of the SPCA and all animal shelters. We feel terrible that by telling this story, it could be giving them a bad name and do not wish to slander or extort them. But we also feel it needs to be told to prevent anyone else from going through the horror we've been going through these past 6 months. 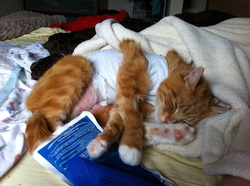 After a month's deliberation on what the best course for Chester and our lives would be, we finally decided to get Chester a surgery to repair his diaphragmatic hernia and bring his organs back into his abdomen. This was a huge, risky surgery that needed specialty surgeons. We couldn't afford to go to the specialists in Vancouver, so we decided to go to a veterinary teaching hospital 8 hours away at Washington State University. The WSU Veterinary staff and students were all incredible and experienced in repairing cases like Chester's.
Chester made it though the surgery ok. His liver started bleeding and his blood pressure (BP) dropped, but they were able to give him a blood transfusion and get his BP up. By that night though, his BP was at shockingly low levels. It took the staff 6 days in the ICU, a few blood transfusions, and lots and lots of medicine to stabilize Chester. In the mean time, everyone who was in contact with him fell almost as deeply in love with him as we are. They even made him a custom eye mask (See above) so he could get some sleep in the stressful ICU.
Chester was found on the streets of Surrey, BC homeless. The surgeons said that his pelvic fracture, and thus car accident were over a year old. This means that he possibly lived on the streets and survived for at least 5 months after being hit by a car and almost paralysed. He fought so hard for life then, and fought for life in and out of the ICU. He's such a strong little guy and has such a love of life.
Because he is such an amazing cat, the surgeons and students fought for us to be given a small grant from a Good Samaritan fund, set up for wonderful animals who either don't have an owner or who's owners can't afford life saving surgery. Without the fund, we never would have been able to keep Chester in the ICU for as long as he was and with as much care as he had. He almost certainly would have died. But the staff agreed, once we hit our limit, no one was going to let money be the determining factor in Chester's survival. We could not be more grateful for the help they all gave us. Even with the stipend however, all of our savings, and most of our credit cards were completely depleted.

It had been three weeks since his surgery. Chester was home and recovering well for the most part. His incision was almost totally healed, his lungs sounded great, he could sleep comfortably again for the first time in over a year (at least), and he could almost be a normal cat again.
However, because his BP crashed to such low levels, his extremities were not able to get the blood and oxygen they needed to survive. His left hind foot was fine, and the right foot was mostly healing, but his two outside toes were dead and not coming back. Because this affected the bone, Chester needed another surgery to amputate those toes to save the rest of his foot/skeletal system. The surgery wasn't nearly as risky or costly as the first one, but we simply did not have any money left. We used all of it to save him the first time. We needed help, and so many responded!